I want to talk to you about these rusty old trash compactors.

Seen from a few meters away, these heaps of junk are an eyesore. But if we move a little closer and have a focused look at these ugly buckets of rust, we might see more than dirty broken-down hulks of metal.

The view of these dirty old machines changes when we get within a few centimeters (1 cm = 1/100th of a meter) of the surface.

All this color is caused by a chemical reaction called oxidation.

A significant portion of almost everything we do is either to encourage or inhibit oxidation. The reason we breathe is to acquire oxygen, because oxygen breaks down larger molecules into the nutrients we need for our bodies to survive. Oxidation keeps us alive (and, ultimately, is killing us.) A vast amount of scientific effort and resources are spent researching oxidation-reduction reactions. To appreciate the connection between life and some rusty trash compactors, we have to zoom in even closer – to the nanometer scale of matter. (1 nm = 1/1,000,000,000 of a meter) This is the distance where atomic and molecular chemistry happens.

OIL RIG is a mnemonic device to help us remember which direction electrons are moving in a reduction-oxidation reaction. This is how I was first introduced to redox reactions in general chemistry. Oxidation Is Loss (of electrons), Reduction Is Gain (of electrons). In other words, electrons flow between materials. So, in the case of the rust (iron oxide – Fe2O3) in these photos: 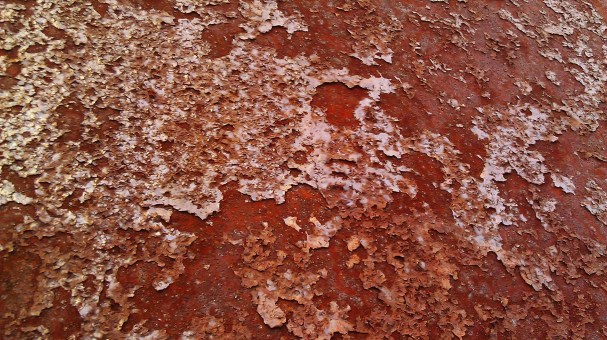 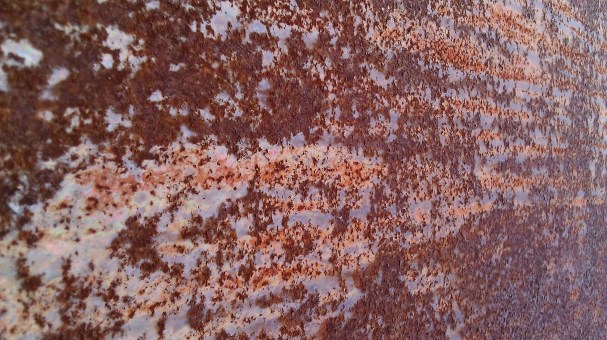 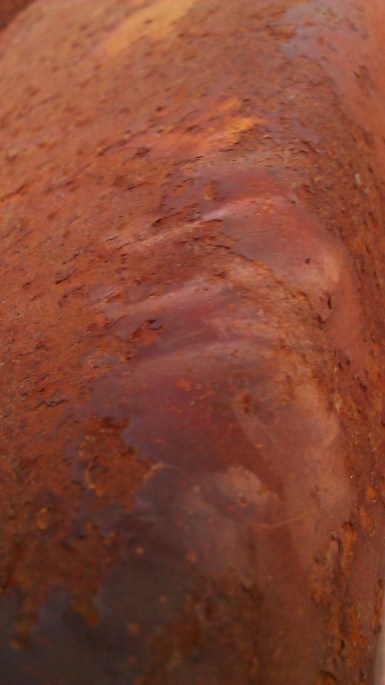 some of the hydrogen (H+) in water (H2O -> H+ + OH–) oxidizes (takes electrons from) the iron, which leaves the iron  with a positive charge. The positively-charged iron can combine with negatively charged hydroxides (OH–). As the iron hydroxide dries (dehydrates, or loses H2O) the product is rust (Fe2O3).

The complete step-by-step chemical reaction is more complicated than the simplified version presented here, so if you’re trying to count atoms to get the right ratio of 2 irons and 3 oxygens to make rust (Fe2O3), just be aware that it won’t work out right from the (incomplete) description given here – other steps are involved in this multi-step electron-transfer reaction (which also includes the reduction of oxygen dissolved in the water.) The purpose of this simplified description is to illustrate that some materials exert a stronger hold (have a greater electron affinity) on electrons than others, and electrons are influenced based on this attraction.

A deeper understanding of oxidation-reduction chemistry allows scientists to develop the technology for more efficient batteries, but also has applications in many other arts and sciences.

The flaking coats of paint on these machines may have been given their colors by metal oxide salts – titanium oxides are famous for being white, chromium oxides are green, and iron oxide can be yellow, orange, or red, depending on the chemistry of the compound. The world of pigments is expansive and historically rich, with surprisingly variable degrees of permanence and colorfastness. So these images are photos of metal oxides peeling from an oxidized surface – all the color is just layers of oxidation.

If you’re still only seeing piles of junk metal, it might not be because some beauty isn’t there – you might not have the right perspective, and that’s something you can change. Objects appear differently, depending on which scale you use to look at them – meters, centimeters, or nanometers. Look a little bit closer, and you might find a world you have been missing.

Here’s a gallery of the full series: 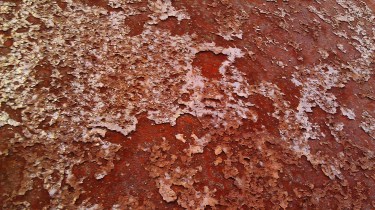 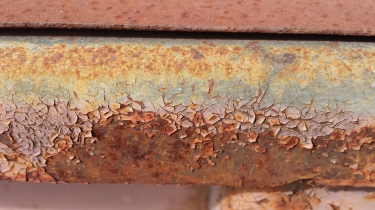 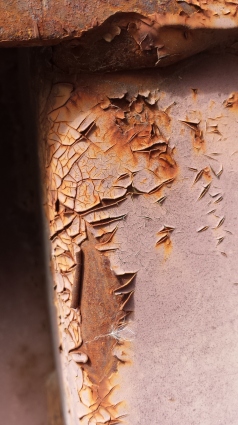 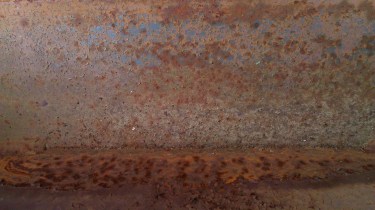 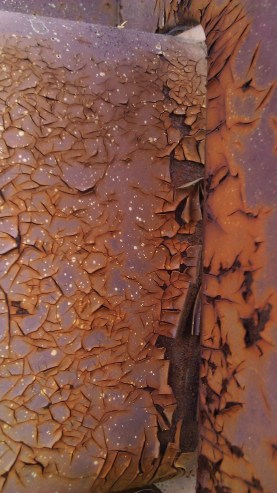 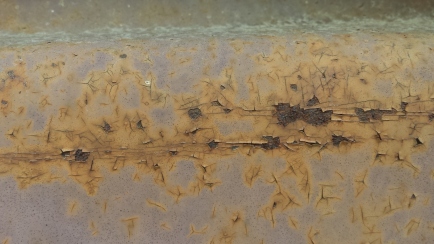 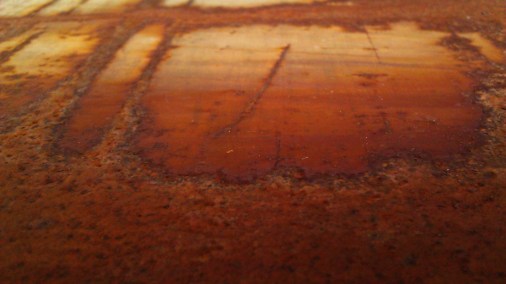 The photos in this gallery are all original and all mine. I took these photos on 2 separate occasions – in July 2011 with a T-Mobile branded HTC, and in October 2015 with a Samsung Galaxy S4. I personally think the HTC was a much better camera. These trash compactors are located in Madison, WI behind Dutch’s Automotive Service – providers of the best car repair on planet Earth. The owners are honest and reasonable, and will get you rolling down the road again without emptying your wallet. Broke down in Madison? Go see Nan and Crystal, they can be trusted to take care of your car. –Tanya Mikulas

Edit April 14, 2016: The oxidation series is now available for a limited time as hand-cut and framed greeting cards.

These high quality photos are inexpensive yet really nice, and make great gifts to send to friends! Click here to read more about (and order!) them.